"Neil Armstrong's first steps on the Moon were watched by six hundred million people," says Dr John Reynolds of CSIRO Parkes Observatory. "And the signals from the Moon were received by the Honeysuckle Creek tracking station in the mountains outside Canberra and Parkes in NSW, as well as NASA's Goldstone station in California."

The signals were relayed to Mission Control at Houston, which initially switched between the sources to try to get the best picture.

Exactly three decades after the TV broadcast of the first Moon landing began, Shuttle astronaut Jim Reilly will unveil a plaque on CSIRO's Parkes telescope commemorating the telescope's role in receiving those pictures and transmitting them to the world.

"Eight minutes after the broadcast started the Moon had risen into the Parkes telescope's full field of view. Parkes was a much larger dish than Honeysuckle, captured more signal and so produced better pictures," says Dr Reynolds.

"Houston switched to Parkes and remained with those pictures for the rest of the two-and-a-half hour broadcast. Using a less sensitive 'off-axis' detector Parkes had also seen the 'first step' six minutes earlier, but those pictures were of lower quality and were not broadcast internationally." 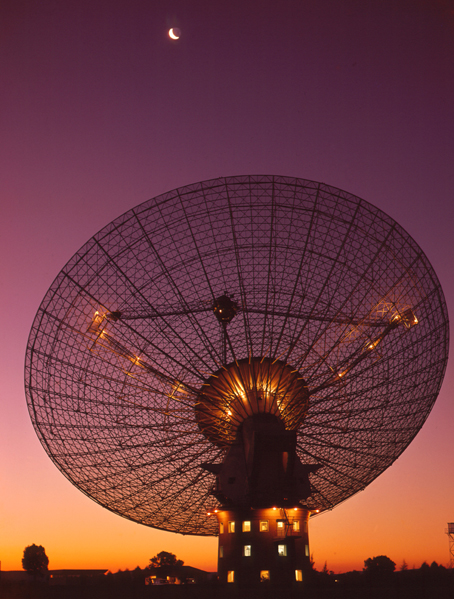 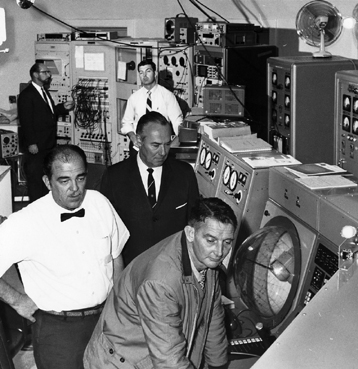 In late 1968 NASA had asked for Parkes to be used in the Apollo 11 mission. The telescope would act as backup for NASA's Goldstone dish. Using it also provided extra gain in signal strength from the Moon. This meant that during the tightly scheduled first moonwalk the astronauts would not have to spend time setting up a large antenna to get the necessary signal strength.

The then Director of the Parkes Observatory, Mr John Bolton insisted on a one-line contract with NASA: "The [CSIRO] Radiophysics Division would agree to support the Apollo 11 mission". 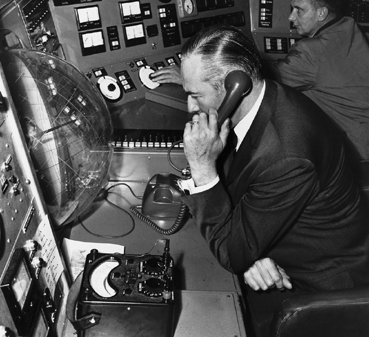 Mr Wilson Hunter, NASA representative in Australia
(At rear, John Bolton, Director of the Parkes Observatory)
Photo: K. Nash
At 6:17 am (AEST) on 21 July, astronauts Neil Armstrong and Edwin (Buzz) Aldrin landed their Lunar Module "Eagle" on the Sea of Tranquillity. It was still some hours before the Moon would rise over Parkes. Departing from the original plan, Armstrong opted for an immediate moonwalk. But it took the astronauts so long to don their spacesuits and depressurise the Lunar Module cabin that as they left the module the Moon was just rising at Parkes.

"While fully tipped over waiting for the Moon to rise, the telescope was unexpectedly struck by a series of severe, 110-km per hour gusts of wind, which made the control room shudder," says Dr Reynolds. "Fortunately these stopped just before the tracking began.

"Parkes staffer Neil 'Fox' Mason, who was seated at the control desk, drove the telescope without being allowed to once turn around and see the incoming pictures on the TV monitor" says Dr Reynolds. 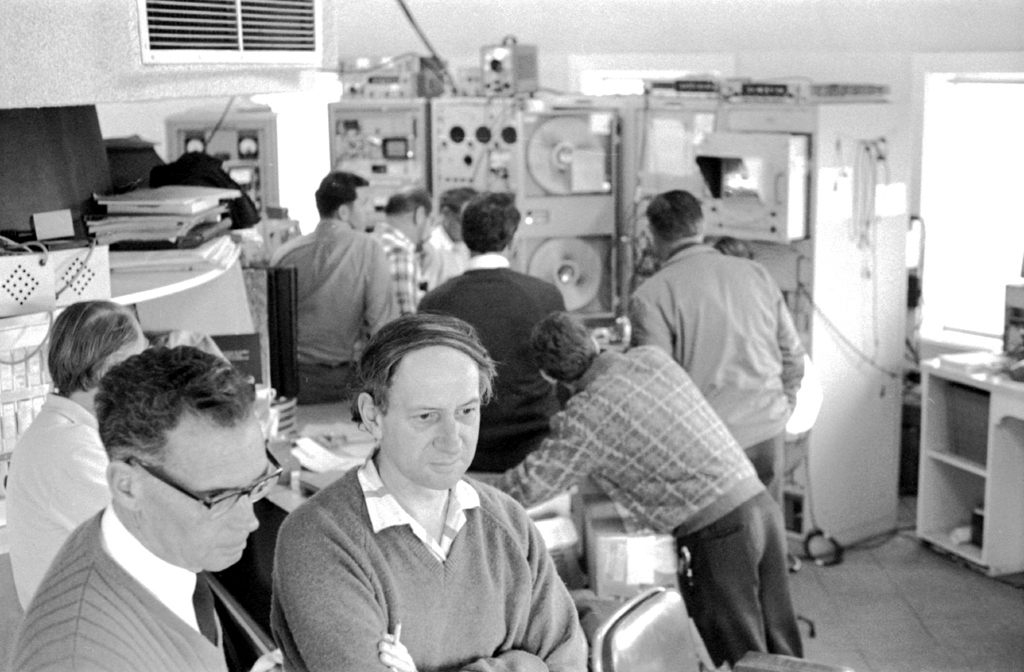 NASA and CSIRO personnel in the Parkes control room.
L-R: Taffy Bowen, John Shimmins,
(at back) William Reytar, Robert Taylor
Photo: K. Nash
The signals were sent to Sydney via specially installed microwave links. From there the TV signal was split. One signal went to the ABC studios at Gore Hill for distribution to Australian television networks. The other went to Houston for inclusion in the international telecast. Because the international broadcast signal had to travel halfway around the world from Sydney to Houston via the INTELSAT geostationary communications satellite over the Pacific Ocean, Australian audiences witnessed the moonwalk, and Armstrong's historic first step, some 300 milliseconds before the rest of the world. 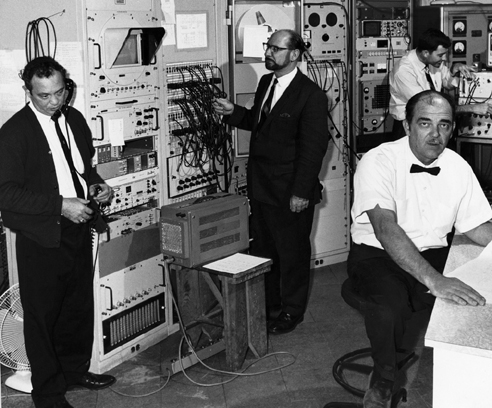 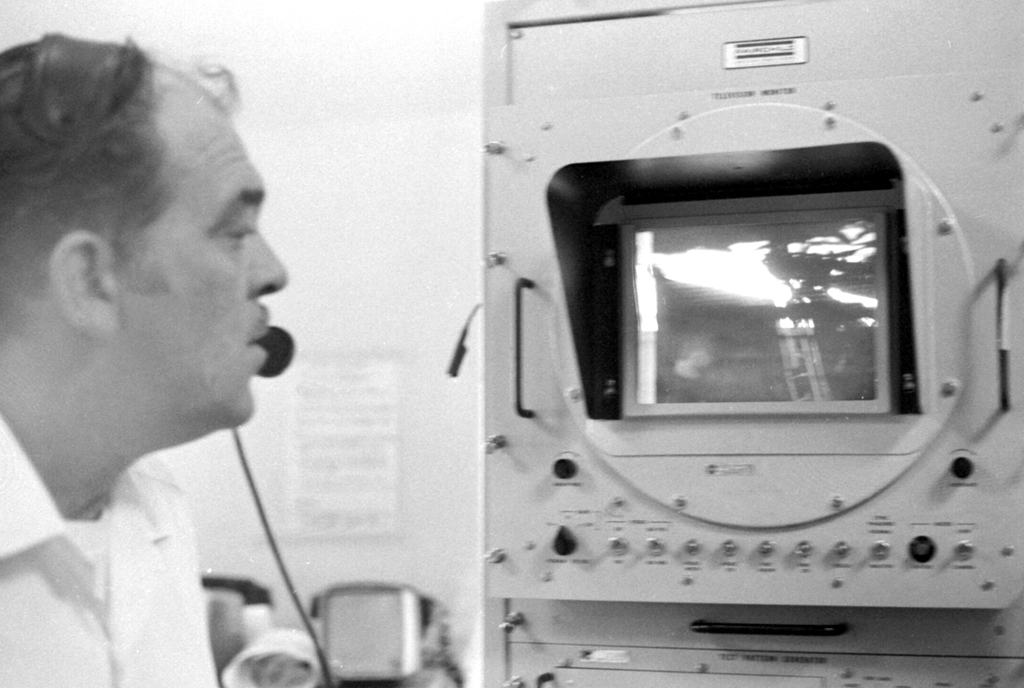 This page is maintained by Sebastian Juraszek
Last Modified: