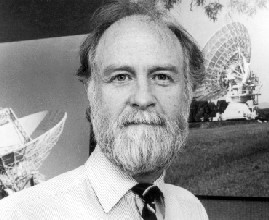 PROFESSOR RON EKERS was appointed Foundation Director of CSIRO's Australia Telescope National Facility in 1988 and he continued in this role until 1 March 2003, when he took up his Federation Fellowship.

He graduated from the University of Adelaide in 1963 and gained his PhD in astronomy at the Australian National University in 1967. His professional career has taken him to the California Institute of Technology, the Institute of Theoretical Astronomy in Cambridge, UK, the Kapteyn Laboratory in Groningen, The Netherlands, and the National Radio Astronomy Observatory, New Mexico USA. He was director of the VLA, the major national radio telescope in the USA, from 1980 until 1987.

This page is maintained by Ron Ekers
Last Modified: 7 July, 2011