Basically, when you channelise B MHz of bandwidth into N channels you get actually N+1 channels, each spanning B/N MHz of bandwidth, and thus totalling B*(N+1)/N MHz of bandwidth. How can that be? Its because of the aliasing inherent to a discrete Fourier transform. Each of the edge channels is actually centred on the very edge of the band, and includes half a channel's worth of aliased power. 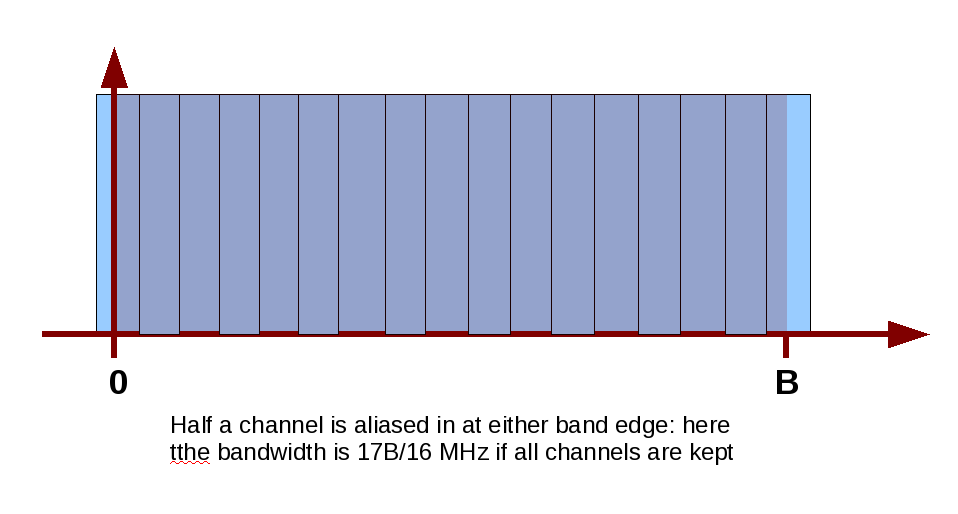 For the DC channel (the one centred on the LO frequency, so the lowest channel for upper sideband data and the highest channel for lower sideband data) this aliasing is not too bad. It leads to a little decorrelation, but at least the right fringe rate has been applied to the aliased power.

For the channel at the other edge of the band, the aliased power is from a completely different frequency (2*B MHz different) and so has had completely the wrong fringe rotation applied. So this channel is completely corrupted. And so, rather than waste space recording this crap, we throw it away. This way the total recorded bandwidth is exactly B MHz, but it is not exactly centred on the original analogue band - its been shifted by half a channel. And the direction of that shift depends on whether the band is upper of lower sideband - it is shifted down for USB and up for LSB.

Now, the real fun happens when you correlate a band which has been recorded as upper sideband at one telescope and a matching band (with different LO frequency but lower sideband) at another telescope. Here, the channel you want to throw away differs for the two telescopes. The way this is handled in DiFX2.0 is to keep the channels which you would associate with the first datastream of the baseline (ie if it is USB, do what you would do for USB, and vice versa for LSB). But since the DC channel of the first datastream corresponds to the corrupted channel of the second datastream, the DC channel of the baseline will be zeroed.